In the wake of Obama's recent decision to stop deporting DREAMers, discussion of the future of immigrant justice has focused on the Obama-Romney race. As the New York Times reported last week, "Mitt Romney struck a more conciliatory tone toward illegal immigrants on Thursday than he took during the Republican primary season." (Well, NYT, so much for the Drop the I-Word campaign.)

But there's a third, lesser-known candidate -- a future president whose decisions will undoubtedly have significant repercussions for Mexican and Central American migrants. And whereas Romney has a shady past and dirty politics, he looks downright angelic next to this candidate.

Meet Enrique Peña Nieto, the PRI candidate likely to become Mexico's next president on July 1. While I read with horror of Romney's homophobic high-school bullying, those incidents pale in comparison to the violence for which Peña Nieto is responsible.

This video, narrated by Mexican singer Regina Orozco, offers a succinct (and gut-wrenching) introduction to Peña Nieto, who served as governor of the Estado de México from 2006-2011. For those who don't speak Spanish, it compiles some of the most notable moments of Peña Nieto's political career:

As this video suggests, Peña Nieto's career has been marked by virulent, internalized homophobia and violent misogyny -- but that's just the tip of the iceberg. 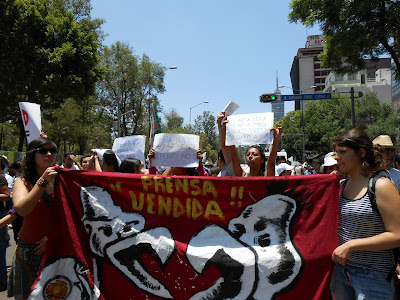 Others protested a return to PRI rule: 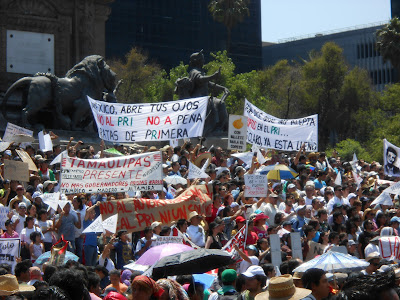 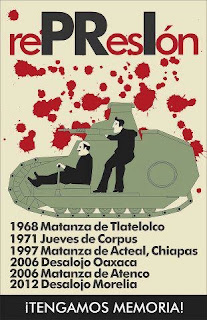 So when Peña Nieto wins another rigged election in Mexico on July 1, here are a few things for immigrant rights advocates to keep in mind:

I'll close with a recent video of testimonies of sexual torture from Atenco. Peña Nieto gave the orders for Atenco, then later boasted of the police operative's success. The poster below carries one of my favorite anti-EPN slogans: "If your daughter had been raped at Atenco, you definitely wouldn't find him so attractive." 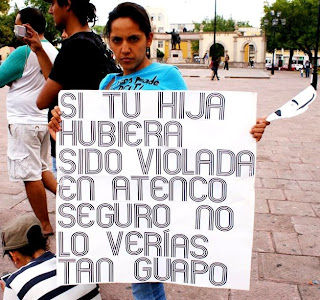